You've Got to Be Present to Win

If you have ever been at any sort of raffle, you've no doubt heard the statement, "You've got to be present to win."  Winning ticket numbers or names are read, and you see everyone looking around hoping nobody gets up so that another ticket is picked.  I am still bitter about not getting a gas card from a faculty meeting two years ago!  I was at baseball practice instead of the meeting.  What made it worse is the meeting was on the day of an Open House where parents come to meet teachers.  After practice, I headed back up to school and went on to be told by at least ten people that I had won a gas card but did not get to receive it.  The sick joy they had in telling me really made me question what people thought of me at school!

Being truly present means locking in to whatever you are doing in that moment.  It's truly listening to what people say in discussions instead of hearing bits and pieces while you think of how you're going to tell them they are wrong.  True presence means focusing on every rep with full intensity and focus in the weight room instead of just going through the motions.  There are a lot of connections between being present and an earlier blog called "Win Now" on my thoughts about what mental toughness is.  The more you're able to be present, during both competition AND preparation, the more you'll be present to win.

Sometimes being present can take on a larger meaning as well.  I was watching a video clip this morning from an interview with Kevin Durant where they asked him about whether he ever thinks about returning to his hometown area and playing for the Washington Wizards.  In my opinion, Durant's response could not be any better for multiple reasons.  The first thing I love is that KD says he doesn't think about it at all unless someone brings it up.  By acknowledging the situation exists if people ask him about it, Durant is being real.  He doesn't pretend that the thought should be somewhere with the Easter Bunny or Santa Claus.  At the same time, he does not waste his daily allotment of energy and focus on a situation that is two years down the road.  The second thing I love about Durant's response is where his focus lies.  He focuses on his teammates, his organization/city/fans, and getting better every day.  I love Durant's focus on getting better every day. While he clearly has a long term view for what he wants to be as a player and person, he is focused on the present moment.  The selflessness and obligation he feels to work for his teammates and organization are awesome too.  In a day and age where many in the media choose to have a TMZ-styled focus on selfish, "me me me" athletes, the Durant's of the world do not get nearly enough credit or attention.  I think there are more athletes out there like this than many realize, but they're not worth coverage to the four-letter network unless they are superstars.  The final aspect of Durant's answer that I really like is it's genuine.  Durant is not a robot.  There is clearly sport psychology influence in what he says, but it's also clear that this is Kevin Durant's answer.  It isn't something he has been brainwashed to say.

For me, multiple groups of people can learn from and relate to what Kevin Durant had to say.  One group I thought of is high school athletes who are committed to colleges.  A big challenge for those guys is to not waste thoughts and focus on all the things they are going to do when they get to college.  Take time to celebrate the opportunities, but focus daily on doing what created the opportunity. This will help when it's finally time to go to college.  That part of the paragraph is the coach in me talking!  The mental coach in me also understands that if the worry is on a year from now then enjoyment of the present experience can suffer.  Growing up, my family was always very competitive with board games.  I'd get especially fired up and pitch fits when I was losing or lost.  My mom would say, "It's all about the journey.  Just enjoy playing."  I hated it then but now have to reluctantly give credit to my mom for being well ahead of me in her sport psychology knowledge.  Consider this my, "You were right Mom!"  Athletes:  Enjoy the last year of high school and all it brings (or the last three or four years with the way commitments are coming earlier and earlier!).

Another group of people who I think can benefit from this is college coaches.  Although I have not coached in college, I have friends who do and have seen the grind of working one's way up the coaching ladder.  Many times it means accepting jobs in areas they may not want to live in the future, with programs they may not ultimately aspire to be a part of, and with duties that may not be exactly what they want to do.  The really good ones are able to accept whatever situation they are in and do their best on a daily basis.

I saw a quote a few weeks ago from Coach Tim Corbin who just won a national championship in baseball with Vanderbilt.  His advice was, "Do the best you can with what you're doing right now."  This really drives home the point of this entire blog regardless of your current roles in sports or life.  Future opportunities are not real until they are present opportunities.  Challenge yourself to get better daily and to feel a sense of responsibility for your teammates and organizations.  Also challenge yourself to do the best job with whatever you're doing now.   It's a great perspective and one that increases the odds for future cool opportunities to present themselves.

Thanks again for reading.  Please continue to reach out to me with any way I can help you out! 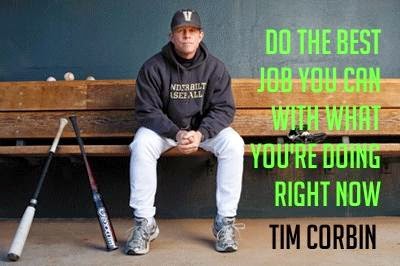