Takeaways From the World Cup Final

Like many of you, I fulfilled my American duty of watching the Women's World Cup final last night between the United States and Japan.  I have to admit my soccer background is limited.  My playing career lasted but one spring and fall season before Dad forced me into an early retirement at the age of 7.  If only Dad had known about the benefits of playing multiple sports, then maybe I'd be in the big leagues now!  Regardless, my interest in the sport has grown over the last several years.  I've become an admirer of greatness in any form, and watching the world's best in anything has appeal.  There were several interesting articles about Carli Lloyd after the semi-final match against Germany, and her commitment to the mental side of the sport piqued my interest as well.  Because there are many much more qualified than I to recap the game and discuss the strategies and sets and blah blah, I won't waste your time with an amateur attempt to do so.  What I will talk about are a few of my mental takeaways as a casual observer of one of the greatest individual and team performances I have ever seen on such a big stage.

1. Playing with Conviction as a Team:  Those of you who are regular readers of the blog or of my Twitter feed know of my belief that playing, hitting, pitching, shooting, throwing, etc. with conviction is one of the most important qualities an athlete can have.  I said something a few days ago about Max Scherzer and the way he is pitching with complete conviction.  Well, last night I saw a team playing with complete conviction, and it was awesome!  The United States came out and absolutely dominated for the first sixteen minutes of the game and took a commanding 4-0 lead.  Everything they did seemed to go as scripted, and they made it look so easy.  The announcers made the comment of it seeming like they had an extra player on the field.  It was a joy to watch.  The term zone was thrown out, and I do believe the entire team was playing with zone-like qualities at the very least.  Carli Lloyd was absolutely in the zone and even said she felt like she blacked out when she scored her incredible goal from near midfield.  The closest I could think of from a team standpoint is the Spurs in the 2014 NBA Finals when they just absolutely blitzed the Heat.  The feeling was the same, and the stage was at it's biggest.  Both teams played with such freedom that is earned through more preparation than any of us who have not experienced firsthand could imagine.

2. Overreaction to the United States not keeping up the first 15 minutes:  So the score of the game is 4-0 after fifteen minutes, and I don't think anybody would have predicted that.  Then, the United States began to play just well instead of out of this world like they had for the first fifteen minutes of the match.  The announcers overreacted and said they had to get back to playing like they had for the first fifteen minutes.  Come on!  I don't think anyone went into the game thinking the United States had to take a 4-0 lead in fifteen minutes to have a chance to win the Cup.  So why would they HAVE to do so when they couldn't keep up the impossible pace?  Luckily, there was zero panic or wavering of trust where it mattered most:  the players playing.  They kept playing, didn't overreact to Japan scoring a goal, and controlled the game.

3. Sportsmanship:  This was the biggest stage in the world.  The players wanted to go out and dominate the game.  Despite this fact and the lopsided nature of the match, both teams showed incredible sportsmanship and grace in the way they handled themselves.  Players were helped up after fouls were committed.  I'm sure some people out there thought, "What?!  What are they doing helping up players from the other team?!?! Aren't they competitive?!  Aren't they TOUGH?!?!"  What about being tough asks for not showing respect for the other team?  Many of the best in the world, after all, play the game or themselves instead of the opponent.  Phil Jackson, Arthur Ashe, and Nick Saban are three examples for you if you need them.  The United States showed an impressive ability to be great sports while still wanting to beat the snot out of the opponent.  Not to be overlooked, the Japanese handled getting beat badly very well too.  They were equally good sports.  They didn't want it any less than the Americans.  They just lost and were women enough to do so with grace.

4. Team, Team, Team:  Everything in the game and in the post-game comments was about the team.  There were really good players on the bench for the good of the team.  Abby Wambach, widely regarded as one of the best ever in the sport, played a meaningless fifteen minutes at the end of the game with the team up three.  It didn't matter because the experience wasn't about her individually.  Carli Lloyd's comments were all about the team and how proud she was of them.  Carli, you just had maybe the greatest individual performance I've ever seen in my life.  Don't you want to talk about yourself?  No.  There was no need for her to do that because the performance did all of the necessary talking on its own.

5. "She believed in every single one of us."  This was a quote that stood out to me from Carli Lloyd about the head coach Jill Ellis.  I think I have referenced such belief before, but to me this is critical of great teams.  The coach has to AT LEAST give off the impression of having belief in every single member of the team.  If the athlete is good enough to be a part of the team and to do everything asked of them, the coach owes that belief to the athlete!  If a coach only shows belief in select players or starters, then the coach sets himself/herself up for disappointment when any form of adversity hits.  It's stubborn to put all of the responsibility for belief on the individual player.  The announcers discussed how one of the players on the team had really been helped by Wambach with her confidence.  This is a player on the best women's soccer team in the world, and she has trouble with confidence in herself.  That was a telling story and one I think speaks to the responsibility we have to foster confidence in athletes at all levels.  Before you bash me for that, I am not saying to baby and coddle them.  I just tend to think all athletes have strengths.  The more we get the athletes to believe in those strengths, the greater chance they have for success.  That is part of why we coach them, correct?  Although I would agree it is crucial to have belief in one's own abilities in order to be a good player, support is something we all need as human beings.

Those are just a few of the many takeaways I had from watching again what I consider to be one of the greatest individual and team performances I have ever witnessed in my life.  To all of the women on the US National Team, it was an absolute pleasure.  As someone who appreciates greatness, you all provided me with 90 minutes of it with the way you played and conducted yourselves.  I won't pretend to understand all of the hard work and dedication it has taken for that 90 minute masterpiece to transpire.  All I will say is it paid off.  You all didn't just inspire little girls who dream of one day being in your shoes.  I can say with certainly you inspired a 31-year-old man, and I can say with confidence you all inspired a nation!  Thank you! 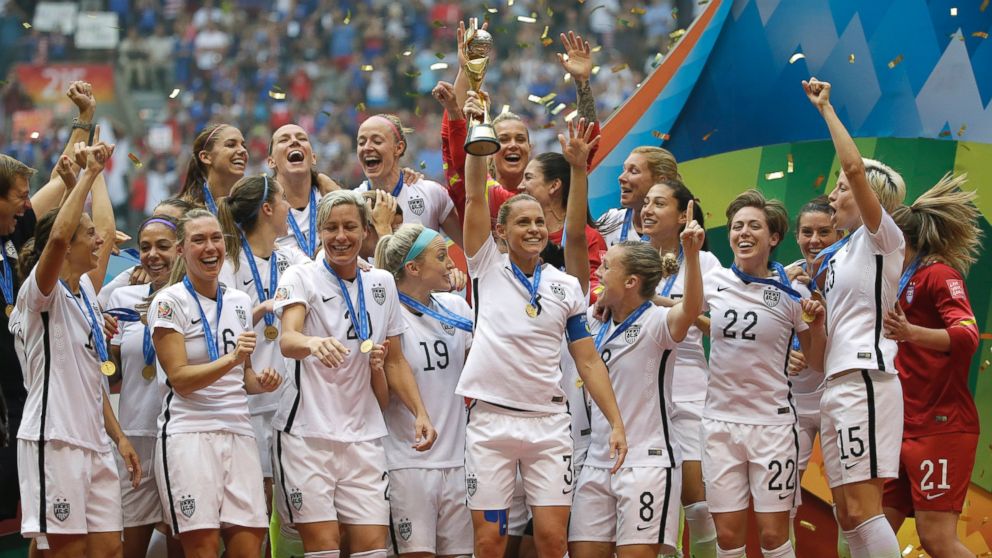 Side Note:  What were your takeaways?  I'd love to hear them from you.  Shoot me a tweet, an email, or comment below.  Thanks again for reading!