Gary Sanchez: The Yankee Phenom Who Couldn't Play for your HS/CollegeTeam

If you're a fan of baseball, you've likely heard about the tear Gary Sanchez has been on since he debuted with the Yankees about three weeks ago.  Sanchez has hit .403 with ten home runs in only 77 at-bats.  That's a pace of 80 home runs in a season.  Not bad.  Unfortunately, while he's good enough as a player and person to be a part of the most fabled clubhouse in baseball history, he wouldn't be good enough for many of the high school and college teams of the coaches reading this.  "What am I talking about" you ask?  What I'm talking about is the toxic atmosphere of coaching Twitter and how the environment not only accepts, but celebrates the constant writing off of kids who make a mistake.  It's the environment where coaches talk about how if a player slams a helmet or doesn't run one ball out the coach certainly has no place for him on the team of perfect people he must have somehow assembled.  How could that kid not be at his peak physical and mental state in the one at-bat that you see him?  Well, it's because he's a kid, and he's not perfect.  None of them are, and none of us are either.

So what does any of this have to do with Gary Sanchez and how he couldn't get a scholarship from you?  I read a great article about him a week or so ago on ESPN.  The article detailed how he and Aaron Judge are talented, high character guys who have a chance to set the tone for the Yankees for quite some time.  The article also mentions how when Sanchez was 18 years old he refused to enter a game as a sub and declined warming up a pitcher.  Why didn't the Yankees cut him then and there?  How could they possibly keep someone of such low moral fiber?  Yes, I know the financial investment has something to do with it.  Professional baseball is a business.  I'd venture to say that isn't the only reason though.  My thought is they also know that 18-year-old's aren't perfect.  They make mistakes.  They're not finished products by any means, and they have some growing up to do.  The Yankees probably thought they could help too.  My question is, "Why don't more coaches on Twitter think the same?"  We preach how we are helping players become young men and preparing them for the real world.  In what real world do you have to be perfect?  How many of these same coaches would want to be held to the standard they are holding the players they are recruiting?  Curse at an umpire?  Not at your best for 1 minute of practice?  Put up the dreaded chopping signal for a fastball down the middle because you get so frustrated with a pitcher's command?  You're fired.  No, of course not.

In reality, I know many of the coaches tweeting this stuff are probably really good baseball guys.  They love the game and want to see it played the right way.  We all do.  All I'd challenge you to do is pause the next time you go to write a kid off because of 5 seconds of poor competitive judgment.  Maybe don't cross them off the list until you've had a chance to see him play again or to ask his coach for a little more about his character.  Maybe, just maybe, we shouldn't trust our rushing to judgment on these kids.  There is a chance you're writing off the next "Gary Sanchez" in your program's future. 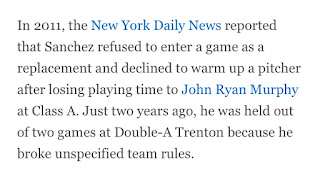