Something that's been fascinating me more and more is a growing trend of Major League hitters experiencing big jumps at later ages.  Justin Turner, Daniel Murphy, and the resurgence of Ryan Zimmerman this year come to mind.  I think I'm drawn to these cases because they go against conventional wisdom in baseball.  The general thought is that players are who they are by their mid to late 20's.  Justin Turner was a nice utility bat off the bench who could play a couple of different positions and spell some guys.  Daniel Murphy would hit for a nice average and some doubles but not a lot of home runs.  Ryan Zimmerman was a little different because he'd been hit hard by injuries, but he'd become a guy who needed to hit down in the order with some questioning whether he should be in the lineup at all or if he may need to stop playing completely.  Justin Turner became a top-10 in voting MVP guy who was rewarded with a sixty-four million dollar contract.  Daniel Murphy became a guy who led the league in slugging and finished second in the MVP voting.  Ryan Zimmerman is hitting almost .400 through the first month plus and is the early leader for an MVP award.  All three are different stories, but they speak to the value of continual learning and being open to change regardless of where you're at in your career path.

A quote by Justin Turner is the actual topic of the blog today though.  It reminded me of Ryan Holiday's The Obstacle is the Way book.  The entire book is great, but the main idea behind speaks to how our perceptions of what happens in live shapes how we proceed.  When you're injured, for example, do you feel sorry for yourself or attack your rehab?  Not playing as much as you'd like?  Do you pout about it and blame the coach, or do you continue to try to improve your skills?  Justin Turner is talking about how he made a swing change, added a leg kick, and worked to hit the ball in the air more often.  Regardless of where you fall in that whole "Hitting Twitter" debate, it's clearly helped transform Turner.  The first takeaway I have from the quote though is the understanding of the path he's taken.  Everything we experience in our lives makes us who we are right now.  The good and the bad both play a part.  Sometimes it's tough when we are experiencing lows, but our mindset and perception can allow them to be building blocks for future successes.  The second takeaway connects, but it's how he's not worried about several years ago.  Why?  There's no point.  Although I'd love for Doc Brown to show up with a Delorean, it's not happening.  We can't go back in time so there's no great value in dwelling on it.  Being present and focused on the now is a valuable trait of a high performer.  It's one we all can work on and improve at and something Turner is clearly referencing.

So where do you go from here?  It's your choice.  How will you handle where you currently are in your career or life?  Maybe you're going through a really great time.  You're playing well, experiencing great relationships.  Great.  Enjoy it.  Understand why you're doing well, and look to continue to make it happen.  Maybe you're slumping or not playing at all.  Sorry to hear it, but my guess is it isn't the first time.  It probably won't be the last either.  Learn from it, and you'll move past it.  Enjoy the challenge of it even.  It's all part of your path. 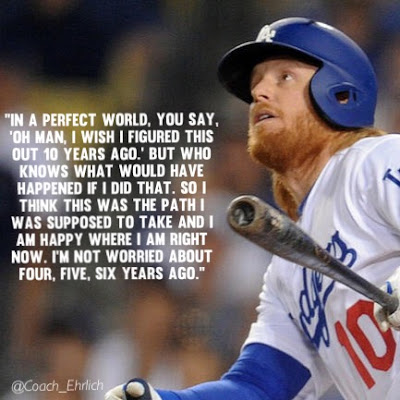