Ryan Howard was once one of the most feared power hitters in the big leagues.  He won an MVP award and finished Top-10 in voting five other times while compiling home run totals of 58, 47, 48, 45. 31. and 33.  Those are some monster years.  Unfortunately, father time has not been kind to Howard.  His performance has dropped significantly over the last several years since he had the horrible Achilles injury late in 2011.  Howard's hit some home runs since then, but he hasn't been able to put together a year anywhere near where he was prior to the injury.  His career provides us yet another reminder of how no matter how much we look down the road at what could be, things rarely seem to play out exactly how we thought they would over the long haul.  Lately, Howard has been relegated to the bench more and more as the Phillies try to figure out what to do with a player who has given them so much but has a questionable amount left in the tank.  From what I've read, it's been tough for everyone involved, but Howard seems to be handling it with class.  He got an opportunity to start for the first time in a few days Tuesday and hit a home run that helped the Phillies beat the Cubs 3-2.  Additionally, Howard provided a learning moment with what he had to say after the game about the homer.

Howard's comments touch on something that is easier said than done.  The easy thing to do in his situation would be to think about how if he didn't play well he'd probably be on the bench for even longer.  His opportunities would likely continue to dwindle.  "I've GOT to prove to everyone I shouldn't be on the bench."  While those are natural thoughts to have, they won't help him within his at-bat.  They won't help him hit a hanging breaking pitch.  When we allow the past or future to pile up in our heads during competition, we do so at the expense of the present moment.  We do so at the expense of the task at hand...being ready for a good pitch to hit.  Howard's ability to not allow all of the tough factors to get in the way of what he was trying to do last night was impressive and something to learn for young athletes out there.  Rather than dwelling in past struggles or what's to come in the future, challenge yourself to focus on the task at hand in games.  "Get a good pitch to hit."  "Stay down on a ground ball hit to me."  "Make a pitch right here."  Great careers are the accumulation of good games.  Good games are the accumulation of good moments.  Good moments stem from action.  Take action now. 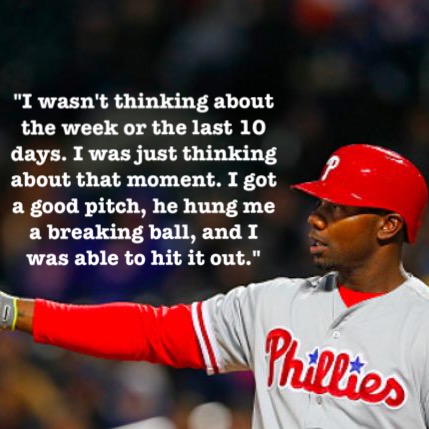