A Lesson in Concrete Reflection- Seeing Beyond the Box Score

You may have noticed I like to read through post-game stories from Major League Baseball.  It's part of my morning routine.  In a way, it connects me back to my childhood and sitting with my Dad reading through the newspaper on a Sunday morning.  I'd always want to start with the sports but would impatiently read through the comics until Dad was done.  When I finally got the sports section, I would study the box scores and see how many hits my favorite players got.  This was prior to the internet and the instant access to that information in real time.  You had no choice but to see the next morning (we did have Sportscenter, of course, but I couldn't stay up that late).  My obsession with the numbers likely played a part in my being very results-driven as a hitter.  If I could go back in time, I'd tell a young me not to look to those numbers but rather to how the numbers happen.  What are these hitters specifically doing to have their performances?  Enough looking to the past though because I'm happy to be able to share that lesson with many others today.  Now, my favorite part of looking at results from the night before isn't the box score.  I love looking through the recaps and seeing how players and managers go about explaining the game that has just ended.  How they react to both the good and bad games is just as interesting to me.  Do they take responsibility?  Attribute it to luck?  Tip the cap to the other team?  Just part of the game?  At a loss for an explanation?  All of those reactions are just part of what I find fascinating in reading the recaps.  In going through them on a morning by morning basis, I start to notice patterns either with teams or with them all in general.  One such pattern has stood out to me, and I think it's something we can all learn a lesson from regardless of your sport or level of play.

The word concrete, as an adjective, means "existing in a material or physical form; real or solid; not abstract."  More broadly applied, if something is concrete, it's there.  Perhaps more importantly, it can be worked on.  As teachers, we look for concrete reasoning in what our students write.  If it isn't there, we're able to specifically tell them what needs to be added.  As a coach, we should look for the same.  What actually happened?  How can we make it happen again, or what can we do to make it work out differently next time?  This may be surprising because some think of psychology as this abstract way of explaining how the mind works.  In my opinion, it's the opposite.  Sport psychology helps to provide reasoning for performance and looks to explain the "why" rationally.  It's not to frustrate athletes and coaches with what isn't there but to help them best handle what is.  In my morning reads of MLB recaps, I see over and over again performance explained by what actually happened- what was visible.  To provide a look at what I'm talking about, below is a "case study" of comments from the Cardinals-Nationals game last night.  I'll give you a setup, quote and quick comment on what was said:

Mike Matheny on Jaime Garcia's performance: "You can tell when his (sinker) is there.  He had very good movement and used his changeup and slider, but the sinker was a great pitch for him tonight."  Movement = concrete, used his changeup and slider = concrete, sinker being great = I could see an argument for this not being quite concrete, but I'd argue you the movement and type of contact make it pretty concrete

Dusty Baker on Max Scherzer's struggles in a 5-run inning: "It wasn't the home run pitch.  It was the walks before the home run.  That's what really hurt." Walks led to more runs, magnification of the home run = concrete?

Stephen Piscotty on Scherzer pattern: "Including the (previous) at-bat he threw me four straight sliders.  Luckily I got that one." Four straight sliders = concrete (Piscotty is a Stanford guy so of course he noticed the pattern!), Luckily = not concrete; I'd argue he's being humble and doesn't really think he was lucky.

Jaime Garcia on his performance: "I made some adjustments I needed to make.  That's part of baseball, that's part of pitching." Only he knows for sure, but I'd say it's concrete again.

Although I think it's certainly possible to argue against the concrete nature of some of the quote, I think the real key is the messages in the quotes can be taken and used to work on and improve performance.  The movement of pitches Matheny talked about can be physically worked on in bullpens, flat grounds, drills, and just playing catch.  Scherzer's walks were likely a combination of things that can be broken down further and worked on.  Recognizing patterns of the opposing pitcher, as Piscotty did, can be worked on.  Executing an 0-1 slider can be worked on.  Making adjustments and understanding when they are necessary, as Garcia did, can be worked on.  In sum, everything in the quotes is behavioral and can be worked on.  What the quotes aren't are judgments of character made by a singular pitch, at-bat, or performance.  When we tell players or teams they failed because they were scared, weren't tough, or some other judgement, the likely resultant is a feeling of confusion about what they can do moving forward.  Likewise, when we attribute good performances to talent or luck, we are also missing on an opportunity to learn.  I'm not saying those judgments aren't sometimes true, but they are more difficult to take in and use moving forward than behavioral observations.  Understanding the why behind performance is critical to being able to repeat performance consistently.  It's equally critical in being able to avoid, as often as possible, the feeling of helplessness that comes with not understanding why things are going so poorly.  Staying as concrete as possible in reflection allows us to more easily take what has happened and use it to move forward.  The big leaguers are doing it, and you should too. 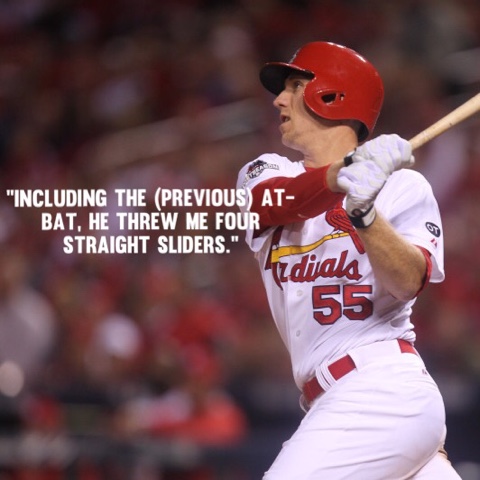