The playoffs have been great so far.  They have been filled with some really big, high pressure moments (all of them or none of them, I'd argue).  Something of particular interest to me is every single team who made the playoffs has some sort of sport psychology professional as part of the organization.  What they do, how much they're there, whether it's one or a team of them, etc. varies, but no teams without SOMEBODY made the playoffs.  This is great because baseball, as much as we preach process, is ultimately a very results-driven industry.  Hopefully the ten or so organizations without anyone will do what's best for its players and follow suit.  Anyway, I bring that up because there is a noticeable mental influence present in both the actions during games and the post-game comments of players and managers.  "Slowing the game down," "being in the moment," and "executing regardless of the situation" have been three of the major themes I've seen.  They're great concepts that are empty words unless the How and Why are taught along with them.  With the players and managers discussing the concepts, there is little doubt they have.  Although they're principles of performance I very much believe in,  I found myself particularly fascinated by Miguel Montero's comments about his game-winning grand slam last night for the Cubs.  There is a message behind what he says that is important for all coaches and athletes interested in the mental side of the game to hear and understand. 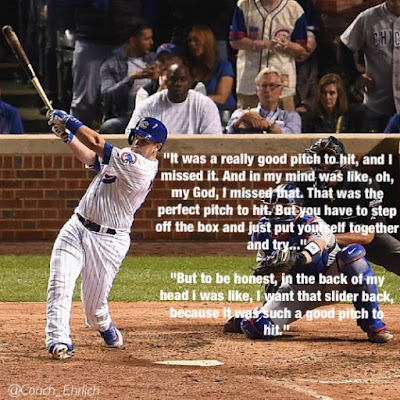 "You've got to be positive!"  No you don't.  You want to be positive.  Being positive about your abilities is preferable to being negative.  Over an extended period of time, if you don't believe you are good you probably won't be.  But in a particular moment, it's okay to have a negative thought.  In fact, it's normal.  The average person's daily thoughts are 77% negative!  We can't expect that number to magically be 0% when they are playing their sport!  Understanding this is important.  It's particularly important to the athletes who are their own greatest critics and are "perfectionists."  If they don't understand, then they'll punish for the thought.  The punishment leads to more and more negativity.  That is when the at-bat speeds up and likely results in the turn back to the dugout.  Miguel Montero was down 0-2 and had missed a great pitch to hit already.  He thought about how he should have crushed the pitch before and had trouble letting it go.  What is important is he didn't allow those negative thoughts to speed him up or make him mail in the at-bat.  Of equal importance to mention is how the negative thoughts are more observational than judgmental.  There is a big difference between, "I should have hit that pitch" and "I suck for missing that.  Now I'll never get a hit."  Montero mentions stepping out and in a longer quote how he was just trying to put a ball in play.  He was able to refocus and come through for his team.  The swing he takes isn't defensive at all or indicative of a fear of failing.  This swing probably doesn't happen if he has been told the only way to perform is to be positive 100% of the time.  To have negative thoughts is to be human.  To act in spite of them, similar to acting in spite of fear, is true courage.  It's true focus.  It's true mental game.  Understand this, and give yourself the freedom of the best chance for you to be successful.