Jason Garrett: One Way to Play

Monday night the Dallas Cowboys defeated the Detroit Lions 42-21 and moved to 13-2 on the season.  With home-field advantage already in place, the focus over the last week of reporters inevitably shifted to questions for Dallas head coach Jason Garrett about resting players.  After the Cowboy victory, in which Dak Prescott played the whole game, Garrett had the quote below to say. 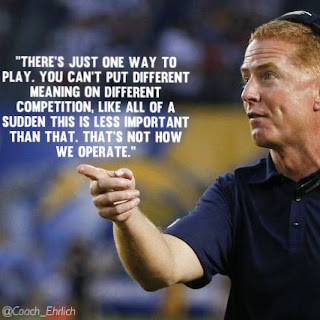 For me, this is one of the greatest separators for pretty good and great coaches, players, and teams.  Great teams hold themselves to a standard that ignores the opponent.  Nick Saban and Dabo Swinney, both coaching teams in the College Football Playoff, make this a constant focus of their teams.  That's not irrelevant to their success.  Kyle Hendricks, who has been getting Greg Maddux comparisons, sent the message consistently throughout the playoffs that he would prepare for the next start the same way he had every single start throughout the year.  Jason Garrett is sending the same message to his team.  Every time you play is an opportunity to compete.

Sports, or life in general, are a battle for consistency.  The more consistent our behaviors, the more consistent our results.  Both sports and life are filled with things we can't control or have great influence over, but our approach is one we can.  When we place varied importance on different games, we open the door for inconsistency.  In reality, there are differences in games.  Playing in the World Series is going to feel different than a mid-may afternoon start in Milwaukee.  Having a consistent approach and playing to a standard isn't ignoring that.  The expectation of consistent preparation and approach is to be better equipped to handle the differences in situations like a heated rivalry with our season "on the line" or a non-FCS school with no chance of beating us (Both situations bring their own challenges to the approach).  It's what Garrett is demanding from his team as the regular season ends and they head into the playoffs.  I'm not saying it will translate into that elusive Super Bowl run the Cowboys want, but it's a great approach and one we can all benefit from regardless of what we do.