Be Where Your Feet Are

Alex Bregman has had a monster first full season in professional baseball.  He's hit a combined .310 with 19 HR, 20 2B, and an OPS of over 1.000.  Bregamn was also a home run short of hitting for the cycle in the Futures Game during All Star Weekend in San Diego.  There are rumblings of Bregman being called up any day now to help the Astros make a second half playoff run, and he's gotten more and more attention as a result.  Bregman checked in with a great quote in an article written about him on ESPN recently.

Bregman's quote struck me for multiple reasons.  For starters, my philosophy on mental toughness centers around the principle of "Win Now."  It means being fully invested in what you are doing and prepared to perform as well as possible at the task at hand regardless of circumstances.  "Win Now" goes well beyond actual performance within the game, and I think it connects well to what Bregman is saying.  Secondly, a couple of colleagues of at IMG used the phrase "Be where your feet are," just the other day.  Although I'd heard similar phrases, I really liked the way they described it and the great visual it provided to young athletes about proper focus.  One connected the phrase  as a possible reminder to reset during a tough tennis match, and the athletes seemed to really like the concept as well (that's who matters, after all).  The "Technically Police" may say something like, "Well, you can only be where your feet are."  Yes, but we all know there is a canyon of difference between being there and being fully present and engaged.  Skill development depends on it.  In-game performance does as well.  Every pitch, at-bat, game, etc. has a value of one unless you allow it to take greater value.

Bregman's use of "Be where your feet are," is part of his goal to just play and not worry about when he is called up.  The decision, after all, is not one for him to make (insert required, "Control what you can control" reference here).  It's another great reminder for young athletes all over across all sports.  We know you have goals of playing in college and/or professionally.  Those are great to have.  The challenge for you is to have those long-term goals without them being at the expense of your head not being where your feet are.  Remember the daily effort it takes to get where you are going, sure.  Those who are able to lock in on, rather than glaze over, reps will be at a competitive advantage.  But also make sure you take the time to enjoy the experience along the way.  For one, enjoyment is a major part of why most of us participate in sports.  It's far too often lost at some point in an athlete's career.  A second reason is the joy of being good at something is a major part of what leads to the strong work ethic required to continue to develop and succeed as you move up different levels.  Enjoy now, over and over again.  Then, see where your feet lead you. 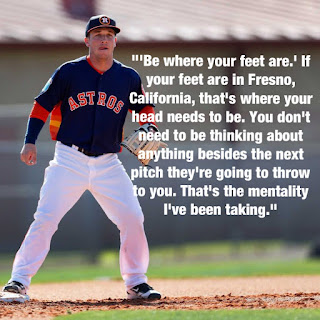 The two colleagues referenced in the blog are Taylor Stutzman and Zach Brandon.  Taylor is part of the full-time staff at IMG.  He works with baseball and tennis and can be followed on Twitter @tdstutzman.  Zach is finishing up his Master's at Cal State Fullerton and has worked with the legendary Dr. Ken Ravizza.  Zach is in his second summer working at IMG and can be followed on Twitter @MVPSportPsych.  Both are great people who are in sport psychology to make a difference.  I'd challenge you to look beyond the number of followers of both and understand there is a wealth of quality sport psychology information beyond the Twittersphere(ironic, I know!).

A Challenging Couple of Years

The last couple of years has been challenging for me as a learner.  You see, I enrolled in a doctoral program to pursue an EdD in P...