Kershaw on His Historic Month

You may have heard Clayton Kershaw is pretty good at throwing baseballs.  He's won 120 games, 3 Cy Young Awards, and has led the league in a seemingly endless number of stats.  What's hard to believe is I think, despite all he has done, he get's overlooked at times because of his "boring" consistency.  Dave Roberts said after last night's game, "I think every time he takes the mound, you're looking at penciling in 10-12 strikeouts, eight innings....It's something that we don't take for granted around here.  We appreciate Clayton."  The Dodgers may not take Kershaw for granted, but I think baseball as a whole does at times.  Except when he has a month like he just did.  Kershaw went 5-0 with a 0.91 ERA and 65/2 strikeout to walk ratio in May.  "Just throw strikes," right?!  Naturally, when athletes have months like Kershaw has had, we want to know what they think about it.  Kershaw keeps it simple, and here's what stands out to me about what he had to say when asked what he thought about the month he'd just completed.

1. "Uh, not much."  This says to me Kershaw doesn't get too caught up in thinking too much about what he has done.  The numbers are the numbers, and to reflect too much about the past is to do so at the expense of what is now.

2. "We beat the Mets."  I love this, and I think it's far from the exception in baseball.  Whenever I read the recaps and players are asked about their performance, there are two basic answers:  1. "I'm just glad I could help our team win."  2. "It would have been a lot better if we had won."  Those are it, and I don't think players are just saying that.  They play to help their teams win.  It's not to say they don't take personal pride in individual performance, but it's a distant second to the team.

3. "Come back again the next time I'm pitching, figure out who we're playing and get ready for them."  For starters, Kershaw doesn't know who he will be pitching against next.  As he doesn't stay reflecting on the past for too long, likewise he doesn't look to what is coming too quickly either.  The quote also speaks to the process nature Kershaw has to prepare for his starts.  "I shove, enjoy it with my team, see who's next, and prepare to do it all over again."

As you can tell from my Twitter feed, I really love the quotes from players and managers after games.  What I really love is what we can attempt to infer about who the players are and what they do.  Kershaw says so much about who he is as an athlete in a simple, four sentence answer.  I'd encourage you, whether you're a player or coach, to pay attention to what athletes say.  There is a lot of free advice being given every single day.  It's just a matter of taking the advice and applying it to what you do. 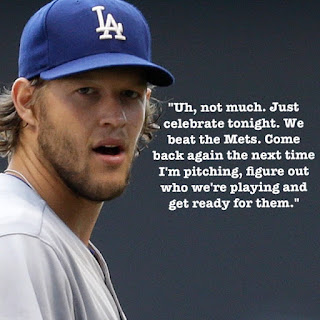