The quote above came from Joe Maddon after Matt Szczur had a big game for the Cubs about a week and a half ago.  Szczur came into the year with about 130 AB's at the Major League level and a batting average around .220.  While Szczur unfortunately went on the disabled list shortly after his big game, his numbers to start this year are markedly better.  Granted it is a small sample size, he has hit .367 with 2 HR and 10 RBI in only 30 at-bats.

One of the great challenges in sports is the transition from one level to another.  Nowhere is that more present than in professional baseball.  In the NBA and NFL, athletes make the jump from college to the top level professionally.  In baseball, the process works differently.  Players drafted or signed as free agents, with very few exceptions, spend several years climbing the minor league ladder prior to getting a chance at the Major League level.  While we generally think of the A, AA, and AAA levels, there is a Dominican Summer League, a Rookie Level in three different regions of the US, short-season, and even the A classification is split into low-A and high-A.  The point is there are a lot of steps that are played out over a period of time.  As players move up, others watch with anticipation to see if they can make the adjustments necessary to succeed at that next level.  There is always such great focus on the differences.  Pitchers throw more of their secondary pitches for more strikes, hitters don't miss mistakes, and the speed of the game are three I hear often.  While the differences are certainly a part of the overall picture, they are only a part.  There are similarities in the game of baseball that far outnumber the differences at every level possible.  In my opinion, the players who are able to make the transitions the smoothest are the ones who acknowledge the differences as areas to grow while remaining confident in what has gotten them there.  In other words, "They act like they belong."

Geoff Miller, who I've written about often in the blog, discusses his work with a pitcher who has been on the verge of breaking in with a Major League club in his book Intangibles.  In sum, the player has struggled in big league camp not just with his performance but with being who he is on a daily basis.  The player tells G something to the effect that he is trying to prove himself and know his place.  G asks the player how this is different than how he'd act if he had several years of service time at the big league level.  The player then explains how he'd probably be much more relaxed and comfortable, and G challenges the player to act that way now because of its effect on his performance.

Dr. Jonathan Fader has a great quote related to the topic in his new book Life as Sport.  He says. "If you're constantly asking  yourself whether you're good enough to be there, it's hard to actually be there."  If you're questioning your ability and/or how others perceive your ability, then your focus isn't in the present moment.  It's certainly not on the task at hand either.  Your focus is in this alternate universe of judgement rather than playing the game you've played for so long.  Getting back to Maddon's quote, he says realizing he belongs is the last step for Szczur.  What if it were the first step instead?  What if as you moved up each level of play, JV to Varsity, HS to College, etc. you did so with the realization that you belong at that level?  How would it influence your day to day behaviors and performance?  You'd probably have a better chance of succeeding and better yet of enjoying yourself along the way.  That's Win Now. 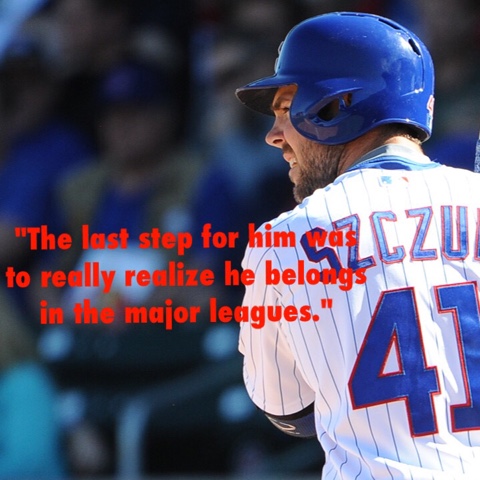