Chris Archer is one of the best pitchers in baseball, but his results have been really bad to start the season.  Archer is 0-4 with a 7.32 ERA.  Opposing players are hitting .345 against him (sorry QUAB enthusiasts), and he's allowing over two baserunners an inning.  In other words, Archer is facing some adversity.  If you play baseball for any extended period of time, you'll face adversity too.  I love to see how players and teams respond to these situations.  Will they freak out, panic, and allow things to snowball?  Will they act like nothing is wrong at the sake of Albert Einstein's definition of insanity?  Will they work to improve?  Will they move on?  What will they do?  Sometimes we like quotes that measure our value as human beings based on these reactions.  I've been guilty of them myself.  "Who we are in adversity is who we really are."  Who are we in all the other times then?  I'm pretty sure we're still ourselves.  So far SABR hasn't accepted these quotes as valuable metrics.  That being said, our reaction to adversity does impact what happens next.  Let's look at what Archer said.

1. "nobody said this game was going to be easy."  This is something that easily translates to different areas of life.  It's okay for things to be difficult!  Some of our greatest moments of satisfaction in life stem from situations that were difficult to begin with.

2. "going to continue to work hard, get better every single day.."  Our work ethic is something we have great influence over.  Archer, if I had to guess, won't just work hard though.  He will work purposefully on something to help him improve.  There's no magic number of swings, groundballs, or pitches here.

3. "I really trust and believe that I'll get past this."  Archer is a confident guy.  Something that is okay to realize is your belief in yourself may waver at times.  That doesn't make you soft or mentally weak.  It makes you human.  That being said, our self-belief has a major influence on our performance over time.  Do you think you are good?

If I were a gambler, I'd bet Chris Archer will turn things around.  Regardless, his words and, more importantly, his actions behind his words give him as good a chance as anyone (not to mention his filthy stuff!). 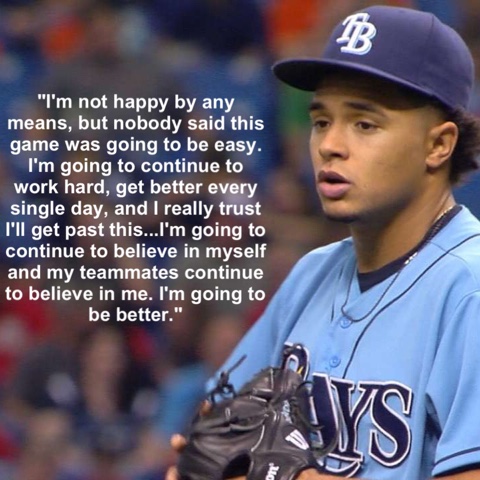