The quote in the graphic came from an article written about Josh Donaldson and his underdog approach.  The praise from an NL scout is about as high as it gets from an effort and focus perspective.  It also hints at Donaldson's ability to maximize his talents.

So why doesn't every player "never take one off?"  Why doesn't every player maximize his talents?  Well, for one it is incredibly difficult.  The discipline Donaldson has to be locked in every at bat takes, among other things, a tremendous amount of preparation and a developed ability to focus on each pitch.  Just venturing a guess, but I don't think Donaldson's college coach or high school coach would say Donaldson's ability to lock in every at-bat was always equal to what it is today.  It's no doubt something he has worked on just like you should be if you're a young player.  The ability to separate one at-bat or one pitch from the next can be the difference between an okay and really good game, a pretty good and great season, and an average to above average player.  Challenge yourself to figure out what has helped you and hurt you in the past from locking in every single time.  Then, work on it.  You won't turn into Donaldson overnight, but the great news is he didn't either. 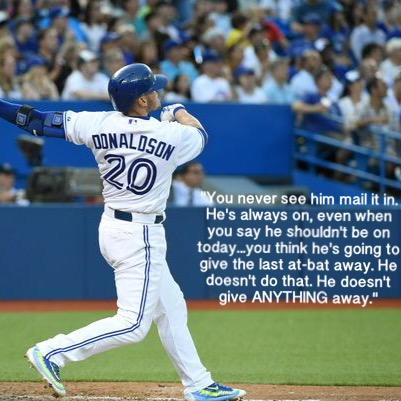