Learn What Nolan Arenado Has Learned

Nolan Arenado is pretty good at this baseball thing.  In his age-24 season, he was an All Star, a Silver Slugger winner, and led the NL in both home runs and RBI.  As good a hitter as he is, he's known probably even more for his phenomenal glove work at third base.  He has already won three Gold Gloves and makes freakish plays on a seemingly nightly basis.  Young kids all over the country are undoubtedly pretending to be him making plays at third.  Nolan Arenado has a lesson for those kids. "Don't do it.  Be yourself instead."
Arenado's quote stands out because understanding who you are and being comfortable with that person is, in my opinion, one of the most crucial attributes in being a successful athlete.  Where this is tough as a young player is you are working to figure out who you are, and it can change by the season.  You're maturing, both physically and mentally, at such a high rate that you have to constantly reassess.  You may go from a singles and doubles guy to a someone with serious juice within a year's time.  In a sense, it seems like you've become someone else.  In reality, you're still you.  You're just a newer, hopefully better version.  If you're lucky enough to play the game for a long time, you'll go through the opposite process.  Your body will slow down along with your fastball, and you'll reinvent yourself again.    Again, you're still you though.  Figuring that out, and carving your own path to being a successful player can be tough.  It's something I never truly got in my experience as a player.  Hopefully you won't say the same when your playing days are done.  Maybe young kids all over the world will pretend they are you making barehand pickups on a field instead. 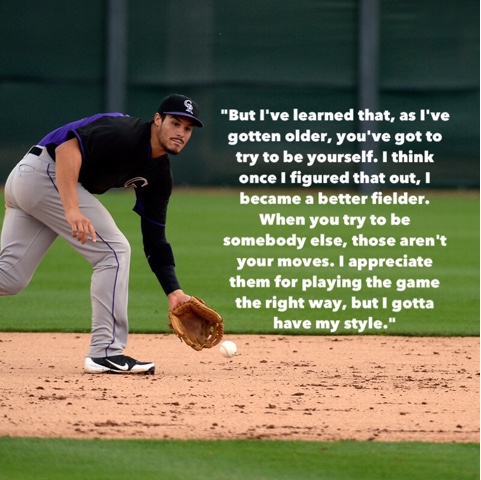